Traditionally, income taxation in Turkey is based on a dual system; namely the taxation of individuals’ personal income and taxation of corporations’ corporate income, regulated in two distinct laws.

What is so puzzling about the Motivations behind Dividend Policy? (1)

A Glance At The New Turkish Commercial Code

The new Turkish Commercial Code No. 6102 (hereinafter referred as “TCC” or “the new TCC”) consisting of 1535 articles was adopted by the Turkish Parliament on January 13th, 2011. But, for obtaining the acquiescence of business actors to the new law and allowing relevant institutions to prepare the secondary legislation, the Turkish Parliament decided to put the new code into force after one and a half years. Thus, the new TCC was put into force on July 1st, 2012.

Manager or the Board of managers (BOM) is one of the legal bodies of the limited liability company (LLC) that has the authority to direct and represent the company. The basic legal arrangements related to the manager and board of managers are explained below.

Upon receiving requests filed by taxpayers from various economic sectors, the Revenue Administration has declared with circular number VUK-82 / 2016-3 that the deadlines for submitting corporate income tax returns, the completion of the electronic books and uploading the certificates of those electronic book to the automation system are extended.

An article has been published in latest version of The Economist (April 9th 2016) under the heading Tax amnesties -Making Crime Pay. Article is about the tax amnesty offer planned by Indonesian Government. Indonesian Government estimates that rich Indonesian have perhaps $900 billion outside the country.

Based on relevant regulations made in Turkish Tax Procedural Law numbered 213, any tax-related notifications should normally be done either via post, official declaration or by a civil servant.

Board of directors (BOD) is one of the legal bodies of the joint-stock company (JSC) that has the authority to direct and represent the company. The basic legal arrangements related to the board of directors are explained below.

The evolution of KOSGEB and its investment benefits

Traditionally, small and medium sized enterprises have come to be known as the backbone of the national economies and their vital significance for a sustainable and viable economic development never faded away.

Foreign corporations in Turkey must file taxes by April 25

The pace of growth and development in the Turkish economy and its foreign trade implications over the last decade, coupled with the deepening interconnectedness of markets across the globe and the interdependence of national economies - both those in geographical proximity to each other and those in distant continents - has brought topics related to direct and indirect foreign investment to the top of the agenda.

Based on the “prepared (pre-filled) rental income tax return” put in place back in 2012, the wider and more comprehensive ‘administration-prepared tax return’ went into effect as of March 1, 2016.

What are the nine investment benefits currently granted?

As briefly mentioned in previous articles explaining the principal aspects and basic working mechanism of the generous investment incentive system that was put into force with the promulgation of the Governmental Resolution on State Aids to Investments, there are nine types of investment benefits granted to eligible investors with differing combinations.

As pointed out in the first article of the Governmental Resolution on States Aids to Investments the overriding objective of designing a national investment incentive framework of this nature via classifying different types of investment schemes and zones and assigning varying combination of benefits to each schemes according to predetermined and elaborate conditions is;

As pointed out in the previous article briefly dealing with the general principles and working mechanism of the Governmental Resolution on Investment Incentives, both the number and scope of individual benefits that a would-be investor is entitled to receive largely depend on which investment incentive scheme applies to the specific situation.

A Quick Look into the Turkish Tax System

Turkey which is the 18th economy in the world with its 2014 (1) GDP almost reaching 800 billons of US dollars plays a significant role in the global economy. We understand the importance of this role, not only through effects of changes in the Turkish economy on the rest of the world, but also by the fact that more and more foreign investors including huge multinational companies prefer to invest in Turkey. International actors pay attention to some indicators such as law system, political and economic stability, quality of human resources, tax system etc. while they make a decision related investment in Turkey.

Foreign Landlords in Turkey Need to File Taxes By March 25

Tax treatment of income elements gained by foreigners from any source of income has been usually on the top of international tax agenda and extensively debated worldwide by experts, academics and tax practioners alike. 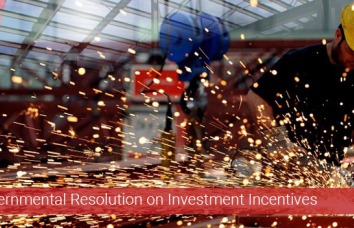 The Turkish government’s attempts to reap economic gains and development through investment incentives can be traced back to the last years of the Ottoman Empire. Incentives to stimulate activities in some sectors and regions and improve the economic outlook of the country as a whole were codified for the first time in the Industry Encouragement Law in 1913.