A Quick Look into the Turkish Tax System

Turkey which is the 18th economy in the world with its 2014 (1) GDP almost reaching 800 billons of US dollars plays a significant role in the global economy. We understand the importance of this role, not only through effects of changes in the Turkish economy on the rest of the world, but also by the fact that more and more foreign investors including huge multinational companies prefer to invest in Turkey. International actors pay attention to some indicators such as law system, political and economic stability, quality of human resources, tax system etc. while they make a decision related investment in Turkey. In this article we will describe one of these indicators: the Turkish Tax System. Before starting, we have to say that because of the impossibility to explain all things about Turkish tax system in a short writing, this article will be more like a summary of theTurkish tax system.

Some Statistics About Turkish Tax System
The following table (2) which represents the general budget tax revenue according to the kind of taxes for a five years period gives a general idea about the present composition of Turkish Tax System. As can be seen in the figure, the proportions of taxes don’t fluctuate substantially. While the avarage of income taxes is almost 31%, the avarage of taxes on expenditure goes up nearly to 49%.  Taxes on wealth represents little part of the tax revenue: the avarage for five years is about 2%. These numbers shows us clearly that the Turkish Tax System founds on the indirect taxes such as Value Added Tax, Special Consumption Tax, Stamp Tax etc. 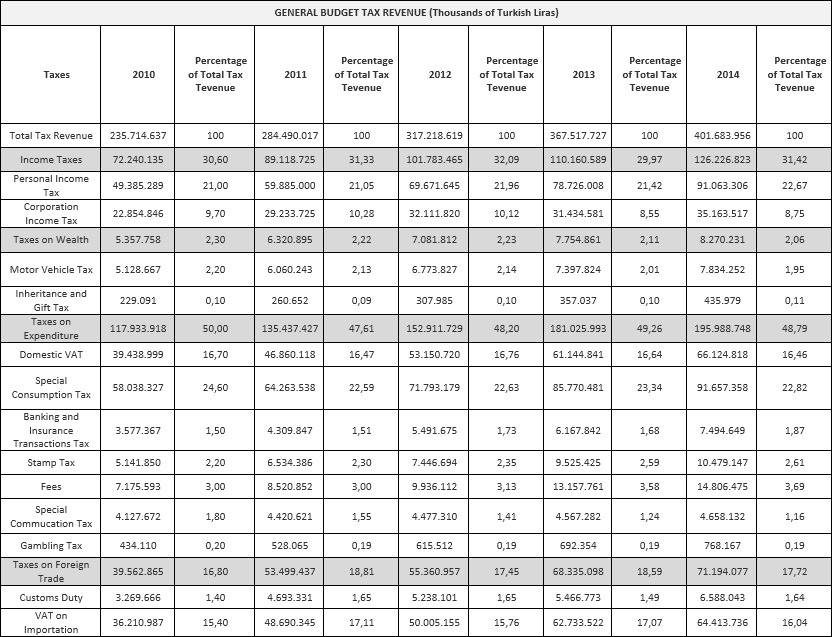